Today's enterprise IT infrastructures are comprised of a complex mix of disparate systems: cloud servers, virtual machines, in-house IT assets, legacy platforms, and more. Managing this complexity via manual efforts is virtually impossible, especially given the high rate of configuration change in the average enterprise environment. This is where IT automation and configuration management (CM) solutions like SaltStack and Ansible come into play.

At the most basic level, IT automation/CM tools alleviate developers and admins from having to write and manage custom scripts for tasks like standing up servers and pushing out software updates. Unsurprisingly, much of this tooling originated from developers/admins addressing their own day-to-day pain points. The leading DevOps tools have followed a similar trajectory over years, usually starting out as popular open source tools and gradually making their way into the enterprise with visual management consoles (versus CLI-only management), advanced reporting features, third party integrations, and more. This is true of the "big four" IT automation platforms, including SaltStack and Ansible.

Created by Thomas Hatch in 2011, Salt—now known as SaltStack—is a modular, Python-based CM tool designed for high-speed data collection/execution. The tool has gained considerable traction in the enterprise for its performance benefits over competing solutions, including Ansible.

SaltStack's speed and performance benefits are made possible by its lightweight ZeroMQ messaging library: a concurrency framework for establishing persistent TCP connections between the server and agents (i.e., Salt master and minions). The platform is available as an open source project or enterprise commercial offering known as SaltStack Enterprise.

Ansible was developed in 2012 by Michael DeHaan in response to leading IT automation/CM tools' shortcomings, including a dependence on agents and overwhelming focus on the Ruby language; the open source Ansible solution is both agentless and, like SaltStack, based on Python. 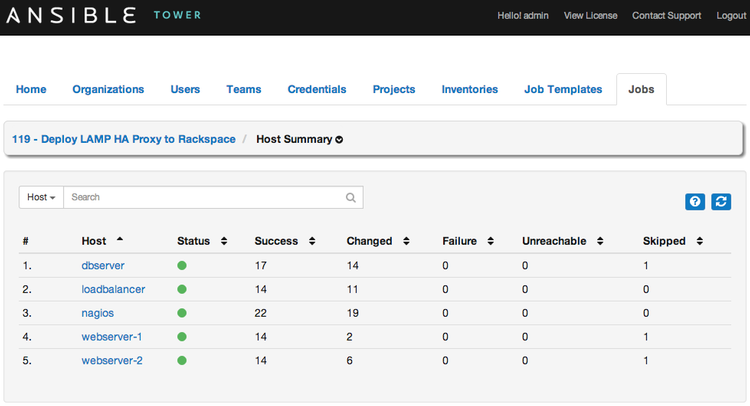 Ansible Tower is the enterprise version that includes a streamlined visual management dashboard, REST API, role-based access control, job scheduling, graphical inventory management, and more. The company was acquired by Red Hat back in October 2015 and is now known as Ansible by Red Hat.

As open source projects freely available to the general public, SaltStack and Ansible—despite being highly capable IT automation/CM offerings—lack features and refinements that make them enterprise-ready. For these purposes, SaltStack Enterprise and Ansible Tower are available, at a cost.

Ansible's simplicity and easy-to-follow documentation give it a leg-up over SaltStack in this category; in fact, it's widely regarded as the easiest to use IT automation/CM platform on the market. SaltStack also provides ample documentation for getting up to speed, and it should: the platform poses a significant learning curve to new users, even seasoned DevOps professionals.

Both of these IT automation/CM platforms are darlings of the open source community, each boasting a legion of supporters. SaltStack's open source project is currently one of the biggest and most active on GitHub, while Ansible has maintained its popularity amongst the community, even after being acquired by Red Hat. In October 2016, Red Hat also open sourced its Ansible Galaxy code repository, furthering its commitment to the Ansible-focused open source community.

Both SaltStack and Ansible are available for free as open source downloads, but more advanced enterprise features will cost you. Ansible Tower starts at $5,000/year without support; subsequent tiers run up to $14,000/year and include 8x5 or 24/7 support.

Expect a similar enterprise pricing structure with SaltStack Enterprise, though specifics are not available via the company's website. It does note, however, that the Enterprise offering is subscription license priced by managed node and level of support.

Both offerings feature an impressive library of integrations. For example, SaltStack offers streamlined interoperability with leading cloud providers such as AWS, Microsoft Azure, Linode, and Digital Ocean, as well as software tools/technologies like Nagios, Docker, and Jenkins, to name a few. Not to be outdone, Ansible also integrates with a myriad of third party offerings, from virtualization tools like VMware and Vagrant to DevOps solutions such as GitHub and TeamCity.

Both SaltStack and Ansible have a solid footing in the CM/IT automation space: some of SaltStack's customers include LinkedIn, Comcast, Rackspace, and NASA, to name a few, while Ansible claims Atlassian, Cisco, EA Sports, Allegiant, NASA, and Verizon as some of its marquee customers.

SaltStack's 646 CSTAR score, while okay, falls short of ideal due to a handful of security flaws, namely lack of HTTP strict transport security and missing DMARC/DNSSEC. Similarly, Ansible's 759 CSTAR score is good, but nonetheless flawed as a result of flaws like an insecure SSL/TLS version and lack of DMARC/DNSSEC.

SaltStack and Ansible have come a long ways since their humble beginnings as open source DevOps tools—even today, the two offerings can't be beat for their powerful low/no-cost IT automation and CM capabilities. And enterprises can't go wrong with either Ansible Tower or SaltStack Enterprise, though for speed and performance, users may want to opt for the latter. In contrast, Ansible Tower is better suited for organizations looking for a lightweight, agentless automation solution that's easy to get up to speed with and manage.

What Is Configuration Management and Why Is It Important?

Configuration testing should not only be an essential step ...